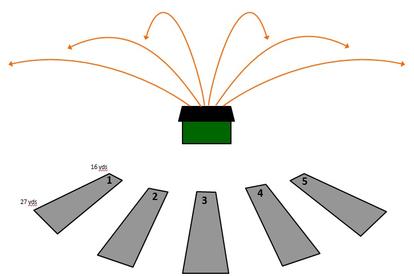 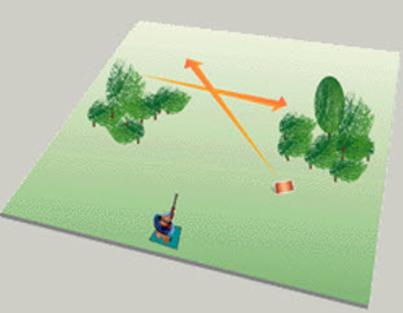 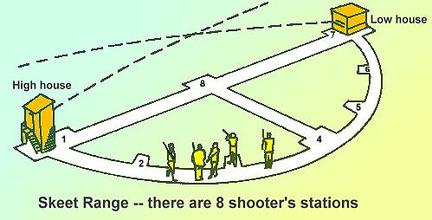 Trap
Trapshooting is a specific form of clay target shooting. Trapshooting is a game of movement, action and split-second timing. It requires the accuracy and skill to repeatedly aim, fire and break the 4 1/4 inch disc which are hurled through the air at a speed of 41 mph, simulating the flight path of a bird fleeing a hunter.The shooter is required to shoot at a target after he calls "pull." It does not matter in scoring if the shooter hits only a small piece of the target or whether he shatters the target. The target is considered a "dead" or "lost" bird. If the target is hit it is "dead." It is the shooters responsibility to check his own score.

Sporting Clays
Sporting Clays is the closest thing to actual field shooting of all shotgun sports. The sport dates back to England in the early 1900s when trap shooting used live pigeons. With the introduction of clay targets, the sport began to take on the popular form known today. But rather than using standardized distances, target angles and target sizes, sporting clays courses are designed to simulate the hunting of ducks, pheasants and even rabbits. Six different sizes of clay targets give the participant the experience of actual hunting conditions, so you can see why the sport is so popular with hunters.

Skeet
Skeet utilizes two machines for presentations for eight shooting stations. The targets emerge from a high house ten feet above ground on the left and a low house 3-1/2 feet above ground on the right. Targets face one another forty yards apart and pass fifteen feet above a crossing stake set twenty yards from the shooting stations. Shooting stations are arranged around an arc running from one house to the other. A round of skeet consists of twenty-five shots, beginning with a high-house bird at station one, then a low house bird, then a double at one, two, six, and seven.

Five Stand
Five-Stand is very similar to sporting clays in that a wide variety of targets are thrown. No two five-stands are exactly alike. There are five "stands" or stations to shoot from. There are usually somewhere between six and eight traps that throw the twenty-five targets. Participants shoot in turn at each of the five stands and various combinations of targets are thrown from the traps. A menu card advises the shooter of the sequence of targets. Five-Stand is a great way to get a sporting-clays-like experience in a small amount of space with very little walking. 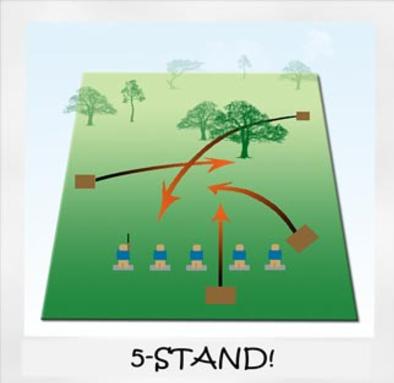